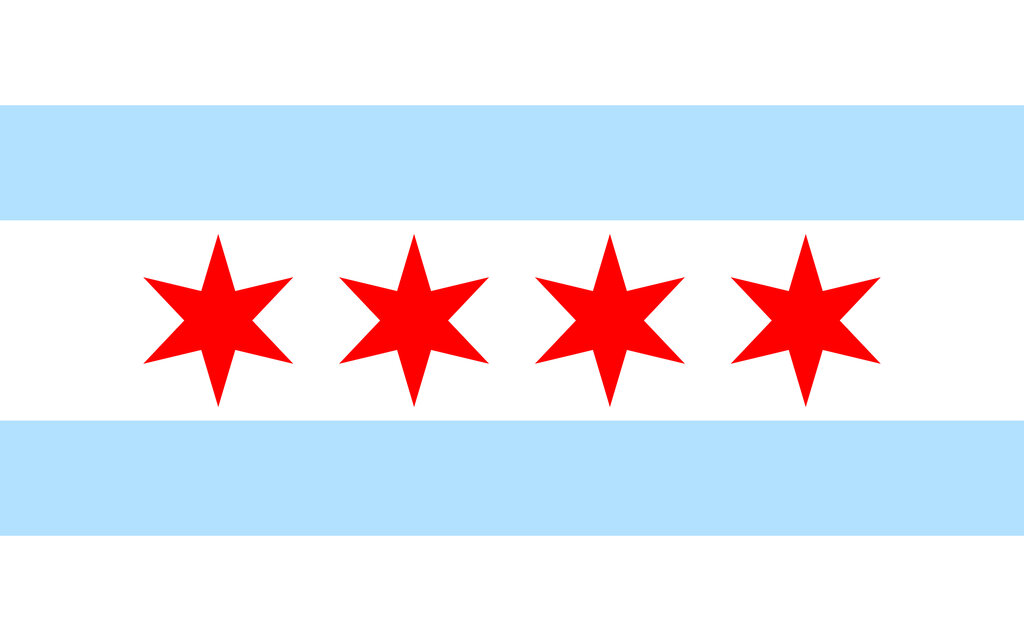 What Does the Design of the Chicago Flag Represent?

Chicago is one of the most popular and populated cities in the U.S.  It has one of the most recognizable skylines in the world dominated by the Willis Tower (still called the Sears Tower by locals) and is home to many landmarks and attractions that draw visitors from all over the globe.

About the City of Chicago

Chicago is also a city of historical significance as industry within the city helped develop the western U.S. in the 19th century, and it is a major cultural center as many artists, writers, actors, and musicians have hailed from Chicago.  Many prominent businesses were started in Chicago, including Sears and Marshall Fields (now Macy’s), and many businesses still operate out of Chicago and the surrounding areas including Boeing, Walgreen’s, United Airlines, and more.

When one thinks of Chicago, several visuals may come to mind, including the Sears Tower, the Lakefront, Navy Pier, and the Bean.  One symbol of Chicago that is recognizable across the U.S. is the city flag.

The Chicago flag has a simple design with 3 white stripes, 2 sky blue stripes, and 4 red 6-pointed stars and different representations of this design can be found all throughout the city.  The flag is flown in homes, outside of businesses and government buildings, and at public parks.  It can also be seen in graffiti art and some Chicago residents even incorporate the design into their tattoos as a display of city pride.

The Chicago flag is easily one of the most recognizable city flags in the U.S. and each symbol on the flag represents something about the Windy City.  In this guide, we will cover the history and meaning behind the design of the Chicago flag.  If you own or manage a business and are interested in moving your operation to Chicago, our commercial movers at Chicago Office Movers can help with every aspect of your business relocation.

History of the Chicago Flag

The history of the Chicago flag starts in 1915 when then Mayor of Chicago William Hale Thompson created a municipal flag commission.  This commission was asked to hold an open public competition in which people submitted their design for a Chicago flag.  The winning design was submitted by a man named Wallace Rice and his design was adopted as the city’s flag in 1917.

Every element of the Chicago flag symbolizes something in relation to the city.  To put it generally, the white and blue stripes represent the city in a geographical sense, the stars represent historical events, and each point of the star represents concepts and virtues related to the historical events.

The bars on the Chicago flag consist of three white bars at the top, bottom, and middle of the flag, separated by two sky blue bars.  Each of these bars represent the following geographical aspects of the city:

Chicago was established on the shore of Lake Michigan in the early 1800s because the Lake, Chicago River, and the Great Canal that connects the Chicago River to the Des Plaines River made it easy to import and export goods by water.  Because of this, Chicago’s downtown area developed on the shore of Lake Michigan and the city could only spread north, west, and south, creating the main geographical regions of the city known as the North Side, West Side, and South Side.

The four stars of the Chicago flag represent important historical events that occurred in the first 100 years of the city’s history.  Each of the 6 points of these stars also symbolize virtues, concepts, and accomplishments related to the historical events.

The Chicago city flag remains one of the most popular and recognizable city flags in the U.S. and has been named the second-best flag in multiple surveys, coming in second to the Washington, D.C. city flag.

There have been proposals for adding a fifth star to represent various people and events including the city’s first African American mayor Harold Washington, the founding of the Special Olympics, and even the Chicago Bulls dynasty of the 1990s and Cubs 2016 World Series.  However, it is expected that the city will stick with the current iconic design.

Relocate Your Business to Chicago 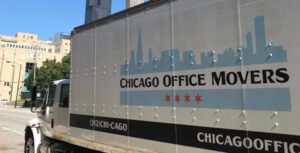 Chicago is a great America city that is home to world renowned businesses and institutions and a proud populace.  There are many great reasons to move your business to Chicago, including access to a young and tech savvy workforce, access to the third largest market in the U.S., access to two international airports, and lower taxes than the east and west coast.  If you want to endear your business to the local workforce, customers, and clients, be sure to fly or display the Chicago city flag.

Chicago Office Movers is a professional commercial moving company that can help you move your business to the city of Chicago or the surrounding Chicago suburbs.  Our licensed, union commercial movers will help manage every aspect of your move to make your office relocation as seamless as possible.

You can reach us at 312-244-2246 (CHI-CAGO) for more information about our office relocation and commercial moving services.