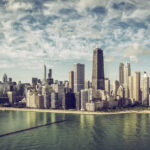 Written by Chicago Office Movers on May 26, 2021. Posted in City Profiles, Community Events 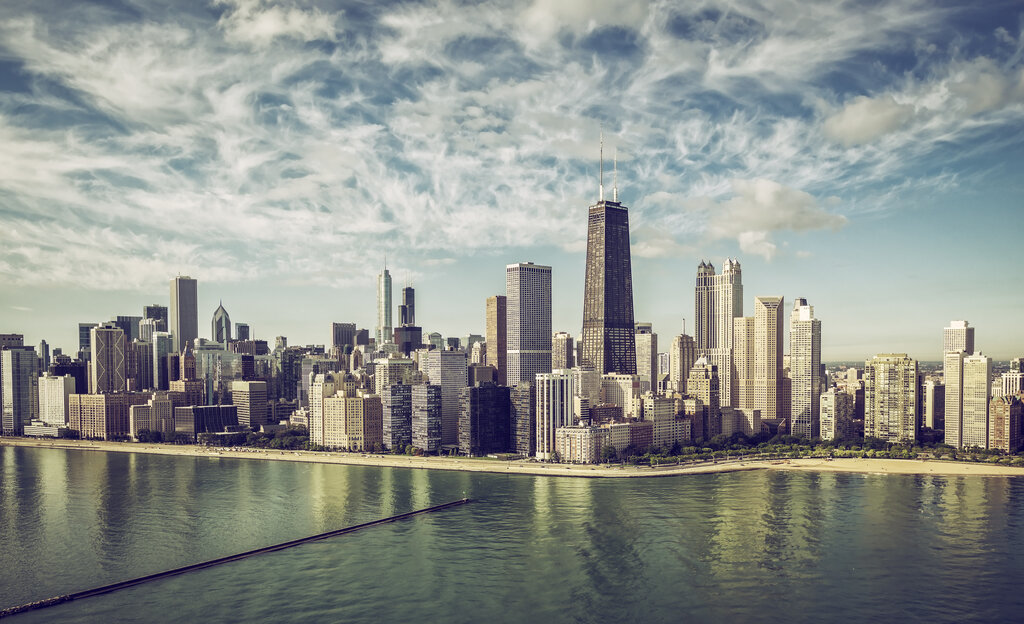 Chicago is a bustling town known for its unique charm and lively nightlife. Tourists flock to this major U.S. city from all around the world. Visitors and residents alike find plenty to do in Chicago. Here are a handful of the most popular attractions in the city.

As the largest city in the Midwest, Chicago was originally a water transit hub. Chicago’s lakeshore borders Lake Michigan, one of the five Great Lakes, and the Chicago River runs through downtown. The city was founded in 1830 and soon became a busy industrial metropolis.

Nicknamed the Windy City, Chicago’s colorful history lends significantly to the major attractions it boasts of today. From recreational activities on the lakefront to stunning architecture in downtown, Chicago continues to satisfy its urban residents and out-of-town tourists with equal zeal. 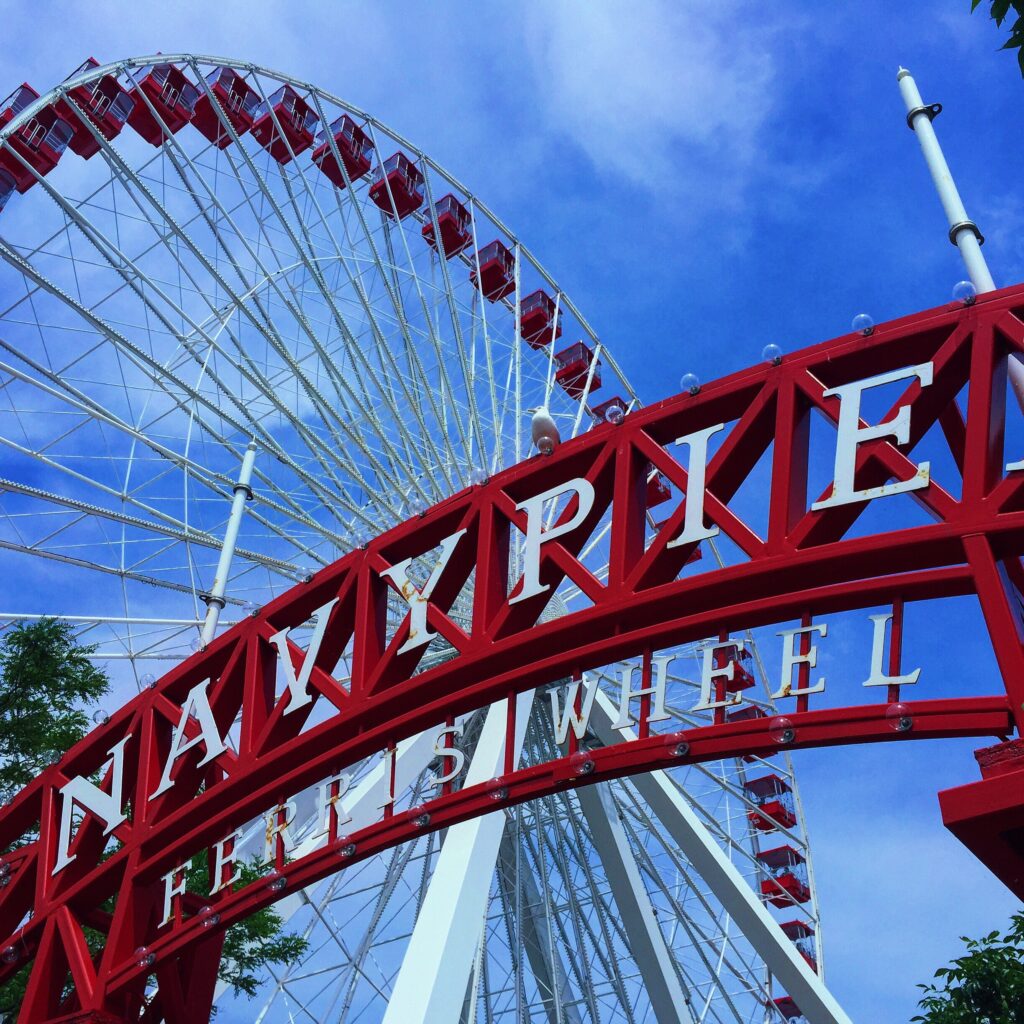 Navy Pier is recognized as one of Chicago’s premier attractions. Nestled on Chicago’s lakefront, Navy Pier offers families and individuals a wide range of events, free public programs, culture and dining and much more. Navy Pier has reopened since the Covid-19 pandemic.

Ride Navy Pier’s Centennial Wheel, which is nearly 200 feet high. The Centennial Wheel gives visitors a breathtaking view of the city skyline, especially as the sun dips behind Lake Michigan at sunset. Visitors capture the spectacular sights even in winter as they sit inside its climate-controlled, heated gondolas.

Chicago’s numerous museums are a testament to the city’s rich cultural scene. Star gazers will find plenty to see at the Adler Planetarium. History buffs can view dinosaur bones at the Field Museum. Chicago’s Museum of Science and Industry is ideal for those who appreciate the sciences.

Art museums are abundant in the city. The Art Institute of Chicago is one of the largest in the world. The Museum of Contemporary Art and Smart Museum of Art showcase diverse artwork. A Chicago Children’s Museum is dedicated to enthralling the youngest of museum-goers

Along with fascinating architecture are majestic skyscrapers that point toward the sky. The Willis Tower (formerly known as the Sears Tower) was once the tallest building in the world. Visitors can head to the Skydeck and look down from the glass balcony on The Ledge on the 103rd floor.

The 360 Chicago Observation Deck (formerly the John Hancock Observatory) is another popular destination within the city. Standing at 100 stories and 1,128 feet high, guests have a unique vantage point of the seemingly endless skyline. Its moving platform, TILT, also offers downward views.

Deep dish pizza is a Chicago favorite and has earned its place as one of the city’s most iconic foods. The famous pizza pies are served in numerous venues around the city, including popular restaurants, like Giordano’s and Lou Malnati’s.

Chicago-style hotdogs are all the rave in the Windy City. Served without ketchup, the Chicago-style hot dog is topped with mustard, pickles, relish, tomato, onions, peppers and a dash of salt. Several well-known restaurant chains serve this flavorful hotdog on a poppy-seed bun.

The Chicago River is a treasured natural feature within the city, and the Chicago Riverwalk allows visitors the chance to enjoy the waterway from close up. The Riverwalk is 1.25 miles long and is dotted with restaurants, bars, and plenty of places to people watch on a summer day. 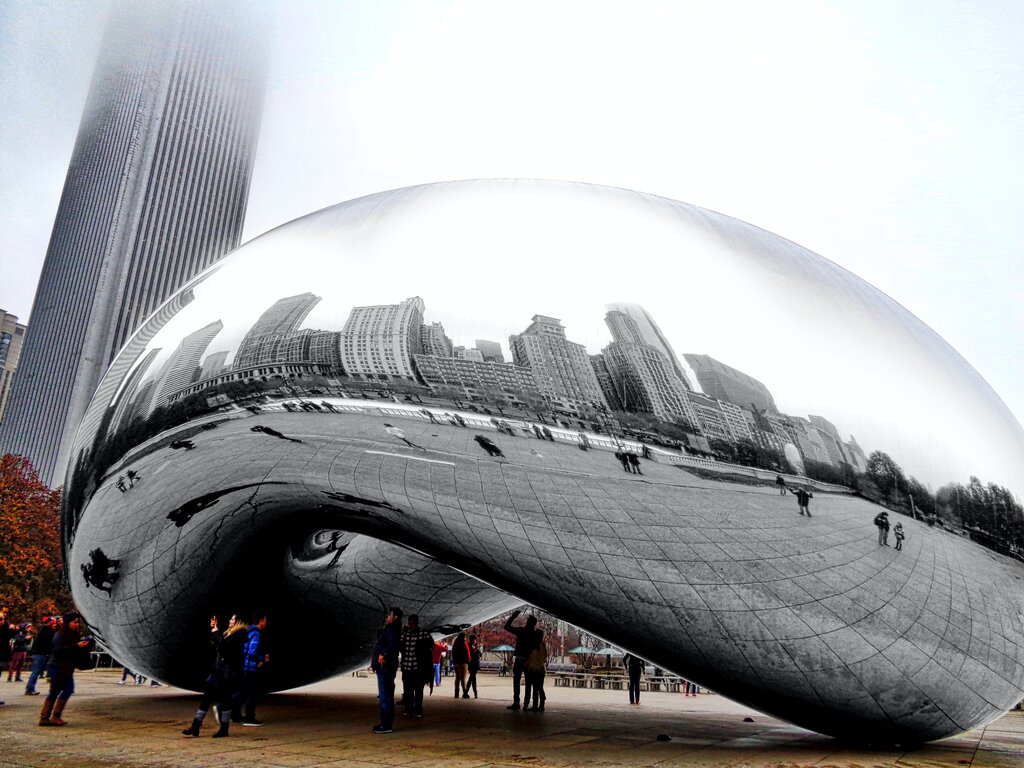 The official title for one of Chicago’s most popular sculptures is the Cloud Gate. The massive public sculpture reflects the city skyline as well as the green space around Millennial Park—the free public park in which it is famously located.

Chicago residents and tourists head to Lake Michigan all year, but crowds especially gather when the weather is inviting. Beaches, like North Avenue and Oak Street, attract sunbathers, while the 18-mile-long Lakefront Trail brings countless bicyclists, walkers and joggers to its paved paths.

Boats may be rented for rides on the lake. Groups may rent a 40-foot boat and cruise along Lake Michigan and then head toward the Chicago River to view the city’s riverfront architecture. A day on the waters of Lake Michigan promises ample relaxation and enjoyment. 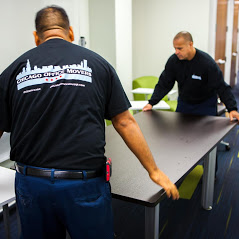 Chicago is a popular destination for leisure seekers and talented job seekers. When the workday is done, the city has plenty to offer. This is one of many reasons why Chicago draws growing corporations. When you aim to relocate your business to the Windy City, choose Chicago Office Movers.

Chicago Office Movers is an experienced moving company with numerous satisfied customers. We have successfully relocated major universities, like Lake Forest College, and well-known companies, like Alcatel Lucent. Our skilled moving crews will relocate your company to greener pastures, too.

Our movers are licensed, background checked, and trained to carefully handle large and fragile office equipment. We ensure your goods remain protected and secure throughout the move. Customers also receive tracking information so they can monitor the progress of their belongings during the move.

Whether your company requires short- or long-term storage options, help with packing and unpacking or add-on services, Chicago Office Movers offers comprehensive moving services to meet all needs. As a Chicago-based office mover, we relocate companies locally, long-distance, or internationally. 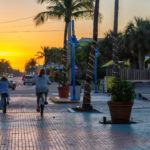 Written by Chicago Office Movers on May 9, 2019. Posted in City Profiles, Corporate Relocation 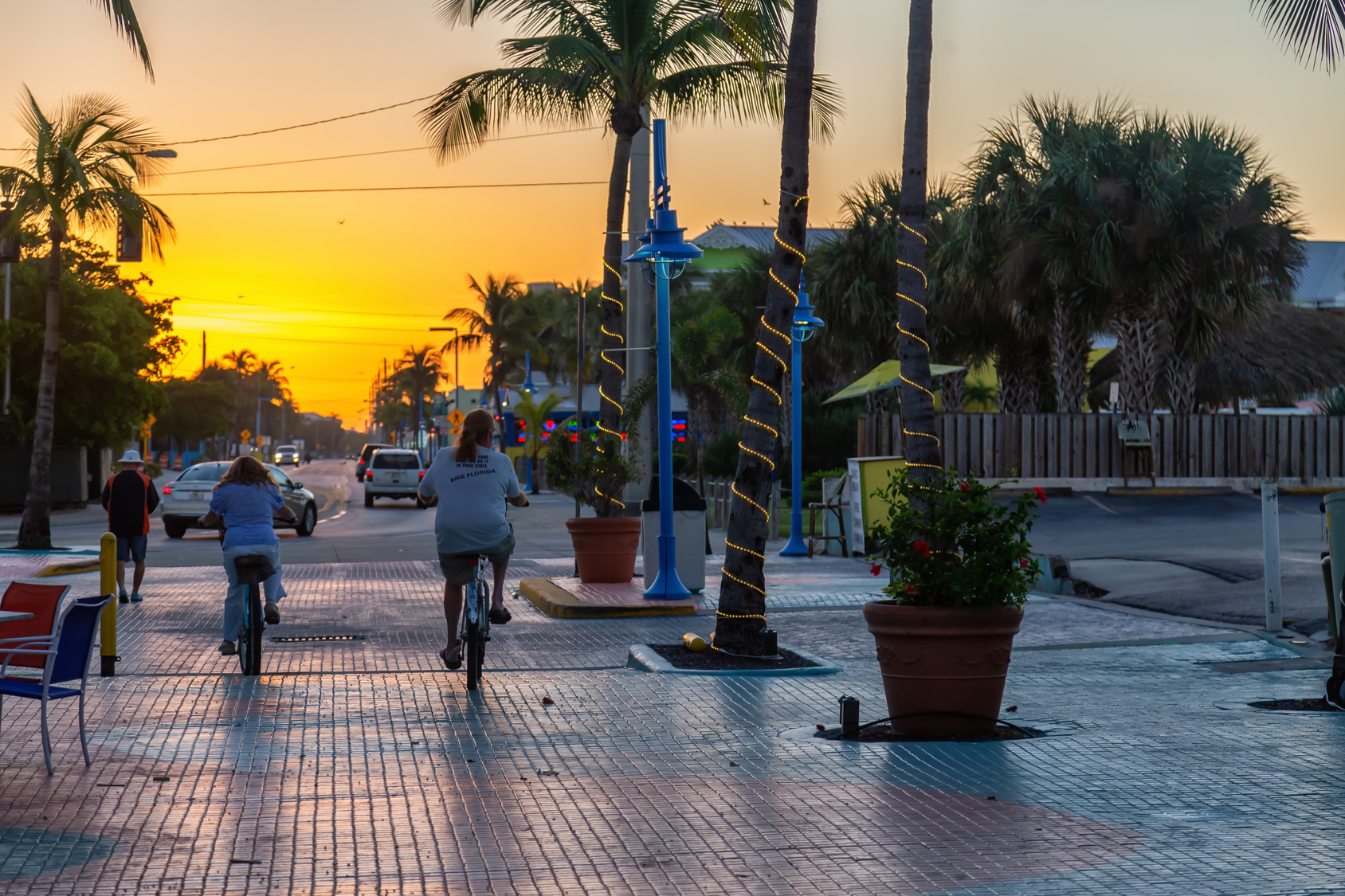 Fort Myers, FL is America’s fastest growing city, according to Thrillist. Big surprise, right? This was based on the reports from WalletHub, measuring 515 cities in the U.S. based on size and population.

In sum, the factors measured from these reports include population and economic growth. In this case, Fort Myers, FL took first place, followed by Midland, TX.

After analyzing the past 7 years of data, WalletHub concluded the study with a list based on a total of 15 different criteria. In addition to population growth, growth of median household incomes, housing prices, number of startups, and businesses moving to the area were measured. Declines were also taken into account, such as poverty rates and unemployment. 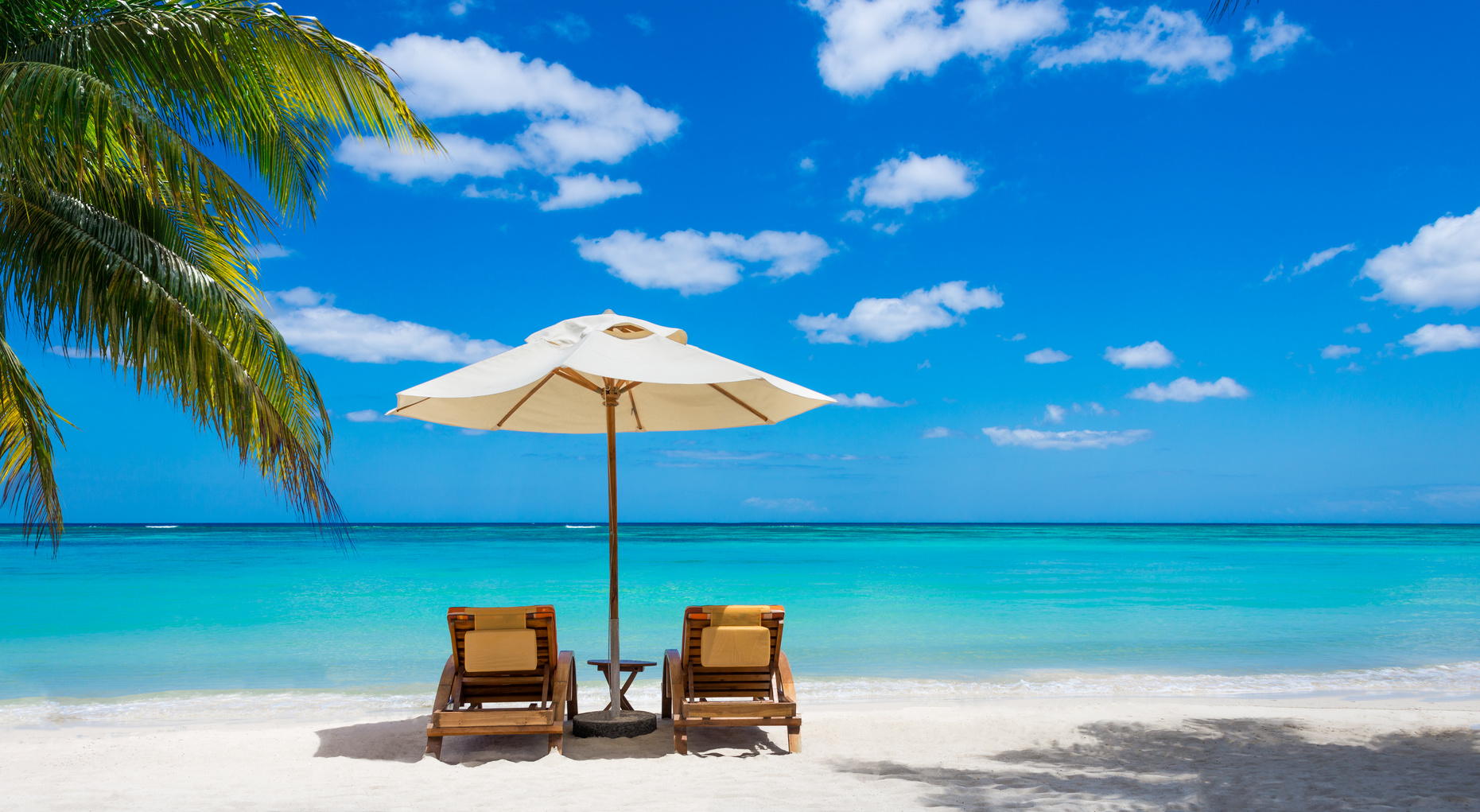 Fort Myers, FL wasn’t always at the top of the list, according to the reports; it didn’t reach the top of the list until 2018. In 2017, the Mayor of Fort Myers, Randy Henderson, told the local News-Press the reason for the boom in economic growth was because of the efforts to attract private investment, build affordable housing for Millennials and young professionals, and update the city’s infrastructure.

Growth in Nearby Cities

Also experiencing high growth is Miami and Lehigh Acres (also on the list of top 15). It’s quite possible that the area in general is experiencing growth, due to the number of families and businesses moving to the same region.

Growth in Other States

What the cities on the list share in common is that many are in the same state. So it may be safe to say that not only cities are growing, but the states too.

Check out the top 20 list of America’s fastest growing cities:

What to Conclude About these Cities

So what is actually attracting people and businesses to these cities? The weather? For some, it’s true but most commonly, it’s the job opportunities and affordability of housing. While cities like Chicago and Los Angeles continue to become more expensive with taxes and costs of living, others are booming as people flock to the south for an easier, more enjoyable lifestyle.

Looking to Move Your Business?

If you’re looking for a change, always be sure to do your home homework and research all options before moving. Just because it’s growing and there are many opportunities, doesn’t mean it’s the best choice for your company; what may be right for every other industry may not be for yours.

One of the best ways to research cities to move your business is to research the economic growth as well as any vendors in the area, culture of the city, local leasing or investment rates, and target market. Surely there’s no place for a snow plow company in Fort Myers, FL. 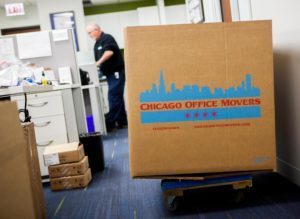 After deciding where you want to relocate your business, rely on the professional services of Chicago Office Movers, based in the Chicagoland area. When working with our experts, you can expect complete care while handling your assets. We have moved everything from desks to machinery to even libraries.

Get a Free Estimate